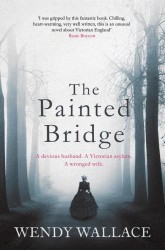 I happened upon this book while shelving at the store one day and thought it looked interesting. I love historical fiction that explores the weird stuff people used to believe about mental illness. It is especially interesting to see how women were treated when they didn’t conform to societal norms.

Synopsis: In The Painted Bridge by Wendy Wallace, Anna Palmer has been left in an asylum by her new husband but doesn’t know why. She went to help some poor sailors who had been shipwrecked in a nearby town, and when she returned he took her to Lake House, an asylum in the country.

Throughout the book you question whether or not Anna should be at Lake House or not. It’s obviously not an ideal place for anyone to stay, and it seems like many of the patients aren’t receiving the care they need, but she has admitted to seeing visions as well. On the outside, her husband also seems to have some secrets he’s hiding, which slowly come to light as Anna struggles to find someone who will believe she is sane. But there are also troubles in family who run Lake House, including financial strain and a willful daughter who is suspiciously thin.

There were some truly awful things done to mental patients back in the 1800s. Anna is subjected to a number of “treatments” when she makes the proprietor of Lake House angry with her. It is hard to believe that anyone could think dousing people in freezing cold water was a cure, or that shaving a patient’s head and packing ice around it (to “cool the brain”) would be at all beneficial.

This was one of those books that I picked up because I liked the cover, and am so happy that I decided to read it. Sometimes you CAN judge a book by its cover.