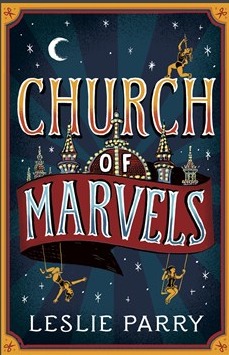 This book took me a long time to enjoy, which doesn’t actually paint the best picture, but I do believe that it is worth it in the end. Over the years I have become a more linear reader, so a book with three main narrators is a hard read for me. I would just start to get into someone’s story and suddenly the chapter would end and I would be forced to remember this new character’s story and why I was supposed to care about them in the first place.

Church of Marvels has a very misleading cover and title. Although it looks like you will be reading a book about the circus, it actually features very rarely in the book. Two of the main characters are from the circus, but they both leave it very soon in the story and the rest of the book takes place in and around New York City.

Synopsis: Odile and Belle are twins who have grown up in their mother’s circus on Coney Island. After a fire claims the life of their mother, Belle leaves the circus and her sister without warning. When Belle finally sends a letter, Odile is compelled to figure out where her sister has gone and why she ran away when they needed each other the most. Meanwhile, in New York City, a night soiler named Sylvan has found a lost baby and takes it upon himself to figure out what could have driven someone to leave it behind. And finally, a young woman named Alphie wakes up to find herself shipped off to an asylum but can’t remember what events could have led her to this fate. As their stories draw together, secrets come to light and lives are changed forever.

I really only started to enjoy this book once the stories started to converge and major plot points were revealed. It is a beautifully written book, but I was finding it very hard to understand the motivations of the characters at the beginning. I found Belle to be a thoroughly unlikable character through the descriptions of her sister, and many of Alphie’s actions made little sense until further into the book. This is a book that I’ll be selling with a warning that you have to push on to truly understand everything that seems so confusing at the start.

One thought on “Review: ‘Church of Marvels’ by Leslie Parry”