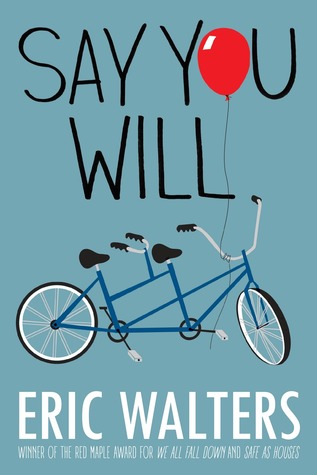 Say You Will is the first Eric Walters book I have read, even though I own another book by him as well. I just thought that the idea of a book about promposals was a really cute idea.

Synopsis: Sam is a genius, but struggles with social interaction. After witnessing the elaborate spectacle that one student makes to ask a girl to prom, he decides to stage his own promposal for a girl he likes. He enlists the help of his two best friends, but everyone is afraid that the girl in question might not accept his offer.

I really enjoyed this book, and even got a bit teary-eyed at the end. By that point it’s easy to guess what is going to happen, but it was the details that really got to me. Sam and his friends go out of their way to make sure his promposal is perfectly tailored to the girl in question, and it’s adorable. I just wanted to hug all of them.

I’m a little sad that we didn’t get to find out more about Sam’s friend, Ian, because he was actually one of the most interesting characters in the book. There is so much potential for some of the other characters to share their side of the story. I don’t know if Mr. Walters has thought about it, but I would definitely read further adventures about these characters, even if it is just rewriting the same story from their different points of view.

So, have you read this book yet? What did you think?

4 thoughts on “Review: ‘Say You Will’ by Eric Walters”