The Sunday Post is a weekly meme hosted by Kimba @
Caffeinated Book Reviewer that doesn’t have a theme, per se, it’s more of a weekly wrap-up. I’m going to use it to tell you about some of the other things I’ve done this week and give you a sneak peek at what’s coming up on the blog next week!

Sunday: It was National Booklover’s Day, but I didn’t get to celebrate it very much, unless you count working in a bookstore. I spent the day helping other people discover the love of reading, so I guess that’s a pretty cool way to celebrate this day. I also wrote a blog about it!

Monday: Back to Job #2 for the first time in a week and there was so much to do! As the communications coordinator I do all the newsletters, and our August newsletter is already woefully behind schedule due to writers block from staff contributors and then my unplanned vacation to help my sister at the hospital last week. It’s a lot of stress but hopefully we managed to get it all done by the end of the week. 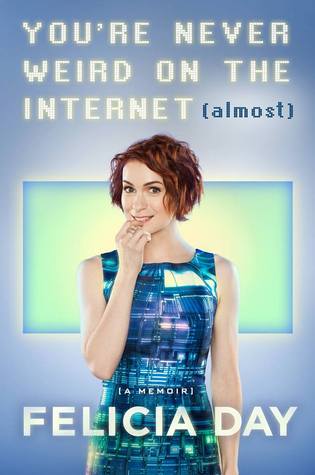 Tuesday: Did you know Felicia Day’s book came out?!?! Because I did. I knew because the very first customer we had in the bookstore on this day bought it, and it was basically one of the only books people wanted all day. That girl has a serious following, and I can totally understand why. She’s cute, she’s a geek, and she’s really nice. I got to meet her at Fan Expo one year and bought a copy of The Guild Season 3 just so I could get it signed by her and Amy Okuda.

Wednesday: Craziest and most rewarding moment of the day is when one of the clients at Job #2 spoke to me for the first time ever. I had always assumed he was mute because he only waves at me as he goes by. I just hope I didn’t give him a weird look when he suddenly started talking to me, because I was so surprised. I’m thrilled that he feels comfortable enough with me to use his voice, since it is obvious that he doesn’t do it often. It was just one of those really cool moments that make me enjoy this job.

Thursday: It was supposed to be a big blogging day for me this day, but I had a lot on my mind and couldn’t concentrate on anything. I sat around watching Gilmore Girls, wandered around online, helped the hubby move some stuff in the garage when he needed assistance, and played with the dog until I had to work in the evening. I managed to get half a blog post written before my brain pretty much shut down.

Friday: The small congregation that uses the gym at Job #2 every Sunday was having a wedding this weekend, so a bunch of them came in to make the place look a bit more festive. It’s pretty adorable, because it’s the first wedding that they are licensed to perform, so everyone is really excited. They put tulle over the basketball nets, which one of the more practical members said is like “putting a tutu on an elephant” but they mean well.

Saturday: I spent the morning in Toronto with my sister and niece at Sick Kids Hospital. They will be there for many more weeks, so I dropped off some extra clothes since my sister had to pack in a rush. Then I went out for shopping and dinner with a friend from journalism school. We wandered around the renovated Square One, which was immensely confusing, and then had a wonderful dinner at Moxies.

I’m exhausted. What did you do this week?