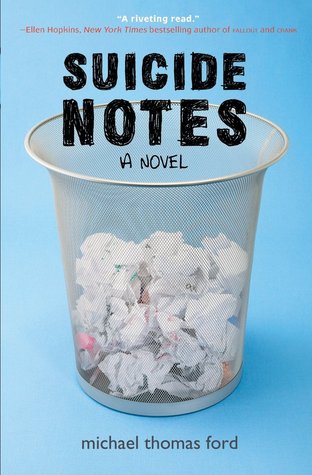 If a psychologist were to look at my Goodreads account these last few weeks they might very well assume that I’m having some sort of breakdown with all these books about mental illness I’ve been reading. In fact, while I do have my own issues with mental health, I just find books like this totally fascinating. I find it interesting to see how different authors perceive mental illness, how they try to wrap their heads around such a difficult subject. Suicide Notes starts off like many other books in this genre, but has a few twists that I definitely didn’t see coming.

Synopsis: Fifteen-year-old Jeff wakes up on New Year’s Day to find himself in the hospital. Make that the psychiatric ward. With the nutjobs. Clearly, this is all a huge mistake. Forget about the bandages on his wrists and the notes on his chart. Forget about his problems with his best friend, Allie, and her boyfriend, Burke. Jeff’s perfectly fine, perfectly normal, not like the other kids in the hospital with him. Now they’ve got problems. But a funny thing happens as his forty-five-day sentence drags on: the crazies start to seem less crazy.

Okay so let’s start off with my most obvious thought about this book, which is that I assumed it would be written like a bunch of notes and instead it’s just a regular novel. In fact, there aren’t any notes in this book except for one. I was a little disappointed by this because I was starting to in on this whole epistolary novel kick and I just assumed this would fit in with both my current reading addictions. It more closely resembled journal entries as each days of Jeff’s therapy course was counted down.

“That sounds weird: “kill yourself.” It makes it sound like you tried to murder someone, only that someone is you.”

That brings me to my second thought, which is that I totally didn’t think that the main character was a guy at first. I obviously didn’t read the synopsis before starting this one, otherwise I wouldn’t have been so surprised. The first couple of chapters gave no indication of gender, so I guess I just filled in the blanks with my own personal assumptions. This really has no relevance on how well the book was written or anything… I guess it says more about my own internalized assumptions about mental health. So many of these books are written about women, so I just took for granted that this would be just like the others.

Finally, I will probably never get used to the level of sexual content that is acceptable in YA novels these days. I am definitely showing my age here. There is a situation in this book that I would consider to be more descriptive than most parents would be okay with, but I feel like I might be overthinking things. Kids today are exposed to way more graphic content than when I was a kid. I’m constantly taken by surprise when parents tell me that they were okay with their 11-12 year old reading The Fault in Our Stars. I was definitely aware of sex at that age, but none of my books ever went into detail the way some YA books written today do. Yep, I’m definitely showing my age.

(good book, enjoyed the change of pace
with a male main character)