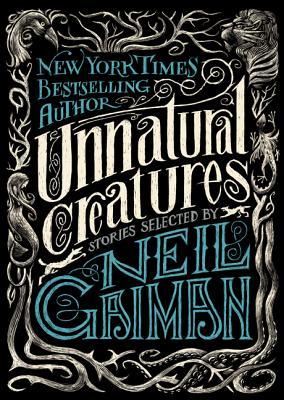 I have slowly been reading this collection of amazing stories selected by Neil Gaiman since it was first released. I own a copy, but often forget it at home, so I have been borrowing it during lunch breaks at the bookstore. Since I have enjoyed a number of books by Gaiman, so I was pretty sure I would like any stories he thought were interesting enough to put his name behind.

Not only is the cover of Unnatural Creatures just beautiful, but the stories in it as equally as wonderful. Gaiman has collected some truly fascinating stories of unnatural creatures. It reminds me of a collection of dragon stories I read as a kid. I love the many different worlds created for these imaginary creatures. It is just amazing that these authors are able to fully develop a world and its inhabitants in so few words. Compare these stories to many of the hugely epic fantasy series that are currently popular, and you can’t help but be astounded by the craftsmanship.

But on to the stories…

It’s hard for me to pick a favourite in this collection, because so many of them are great. Although I started reading this collection many months ago, the Moveable Beast by Maria Dahvana Headley has stuck with me since then. It is the story that defines this collection for me. It’s about a town that surrounds a mini-forest, and a beast collector who has come to capture the Beast that dwells there. The narrator is a girl named Angela whose father has been hunting the Beast for the past three years. She is dragged into the fray by the collector, but she knows more about the Beast than he expects. The story is quick, witty, and so unique that I just couldn’t get it out of my head.

Gaiman has chosen a well-rounded group of authors for this book. If you aren’t a fan of classic mythical creature stories, you might get a kick out of the science-fictiony story of a man from the future going back in time to find a horse. Big name sci-fi/fantasy authors like Diana Wynne Jones, E. Nesbit, Larry Niven, and Peter S. Beagle have authored some truly amazing stories that are hard to forget long after you have put this book down.