One of the girls in my book club described 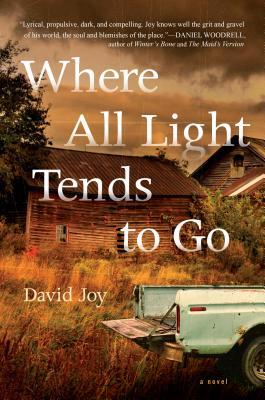 Where All Light Tends to Go as “if Stephen King was writing for Breaking Bad“. As someone who has only read one Stephen King book and has never watched an episode of Breaking Bad (pretty sure I just lost some more followers there…), it’s hard for me to tell if that is an accurate description, but everyone else in the group seemed to agree, so I’ll go with it.

Jacob isn’t your average high school dropout. His dad has been running the drug trade in town for years, and Jake is pretty sure his future lies along the same path. He doesn’t particularly enjoy the trade, but he sees the small-town life as his fate. But when things start to go wrong after a botched interrogation his dad put him in charge of, Jake is forced to choose between the life he knows or an uncertain future on the outside.

As someone who grew up in a small town in the middle of nowhere, I can relate to Jake’s fatalistic attitude, but that’s about all I was able to connect with him on. I don’t enjoy reading about drug culture. I am interested in understanding addiction and how people get to that point, but I don’t really want to read about the violence and corruption that surrounds that world. I just feel bad for Jake, a guy who just can’t seem to escape the situation he was born into.

I’m going to give this book three stars for a couple of reasons. One, it is very well written, with enough description that you can picture what’s going on without it being overwhelmingly and I’m sure that other people will be drawn to the subject, but it just wasn’t for me. Two, I think the author did a really good job of describing the small town experience.